Initially, your child may not be willing to try new foods.  You may have tolerated this as your child may prefer to starve rather than eat new foods.  Or your child may vomit up new foods.  Remember, toddlers tend to be very picky about what they will eat.  We are usually still introducing foods at that time.  So, it is understandable that a child who has not progressed through this developmental stage would still refuse new foods. However, as the autism recovery process proceeds, your child will become capable and willing to try new foods.  Some of the children we have worked with have just suddenly reached into his parent’s plate to take new foods and try them.  He spit out what he didn’t like and pick up something else to try!  Others require the use of special techniques like Big Plate Little Plate.

In order for Big Plate Little Plate to become an option, your child must be capable of transitioning and bargaining.  Also, your child should no longer give drastic responses such as vomiting or starvation when presented with new or undesirable foods.

Big Plate Little Plate requires you to introduce a very small amount of new or undesirable foods on a little plate.  The little plate can be a saucer or a tiny, toy plate.

Once they have at least tasted the food on the little plate, you may then give him his favorite food on a bigger plate.

You may find that the child will throw a tantrum or refuse to eat.  This is acceptable just as long as it is a tantrum and not a meltdown and they eventually eat within a matter of hours.

As your child progresses through this phase, you can try combining the foods onto one plate to see if he will still eat the new or undesired food. 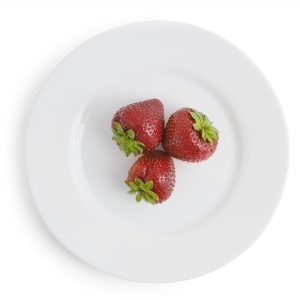