Skeptics of dermal chelation have given negative press to this process.   Inside Edition and various Internet “experts” claim that the type of equipment used for dermal chelation does not interact with the body.  Unfortunately, they tested equipment that’s available on the internet for as little as a few hundred dollars.  That inferior equipment resulted in dermal chelation (DC) water that looked identical to the control for all participants.  They tested the water and found nothing that obviously came from the person receiving the dermal chelation.  They failed to realize that the results from that faulty, imitation equipment is not universal.  Look at the three pictures below.  Notably, the resulting DC water from our preferred equipment is drastically different from the control.   It is also very different from one person to the next. 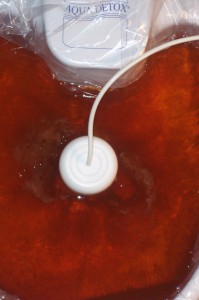 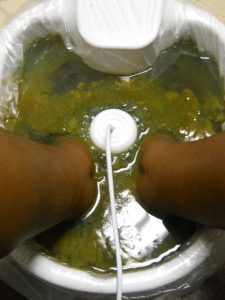 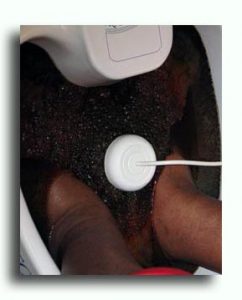 In choosing equipment to use at our facility, we considered that the Ion Cleanse SOLETM, produced by AMD.   We found that it does interact with the body, but not very effectively.  Therefore, we were surprised to find that Kennedy chose the Ion Cleanse SOLETM for her research.  We believe that it is the ineffective interaction with the body that led to specific changes.  For example, the total potentially toxic element concentrations for water resulting from the process performed in tap water increased.  In this case, there was 550% more arsenic and 1,005% more cadmium. ([1])  The only way these substances could have been in the resulting water is for them to have come from the person.

In spite of these significant increases along with others that Kennedy reported, she surprisingly concluded that there did “not appear to be any specific induction of toxic element release through the feet when running the machine according to specifications.” (Kennedy, DA et al [2])  It appears that it was the hair tissue mineral analysis (HTMA) that invoked this conclusion.  Let’s take a closer look.

In Kennedy’s research, she stated that hair mineral analysis indicated no significant change. ([3])   Trace Elements, located in Addison, Texas, is our preferred laboratory.  Trace Elements test samples for over 46 countries  and requests that the hair be washed prior to collection.  They also request that a qualified health professional collect the hair sample after it has been washed.  Consequently, we have our clients wash their hair at our facility.  Then one of our trained staff members collects the hair samples.  The type of shampoo used is documented on their form and forwarded with the hair.

Kennedy et al. simply requested participants “to provide a hair… sample for analysis following instructions provided by the laboratory”.  There is no way to know if these participants follow the proper procedure?  Unfortunately, the instructions listed on the website of the laboratory used by Kennedy et al (Canadian Alternative Health Laboratories in Concord ON, Canada testing for North America) does not say to wash the hair.  Their instructions say to wash the scissors, and your hands, but not the hair.  Therefore, the hair could be contaminated by hair products and whatever environment the person walked through since they last washed their hair.  This can skew and distort the HTMA results.

Based on HTMA, Kennedy et al conclude, “Contrary to claims made for the machine, there does not appear to be any specific induction of toxic element release through the feet when running the machine according to specifications.” Considering the time table for collecting samples for the HTMA will help put this statement into perspective.  The correct schedule is depicted in figure 5.  Note that in Kennedy’s schedule, the follow up HTMA will include the areas labeled 1, 2 and 3.  This is depicted in figure 6 above.  Unfortunately, doing the DC process for only the first month, labeled 1, will leave the hair growing for the next two months, labeled 2 and 3, to occur after the study has concluded.  Kennedy included the hair from that grew after the study concluded in the study results.  This can minimize results from the first month.  This also means that the  550% increase in arsenic and 1,005% increase in cadmium may be much less that what it might have been if you only looked at the first month or continued the study for three months.

Kennedy et al does not report the starting amounts for the HTMA reports.  Therefore, we have no way of knowing if the participants started with a significant THM load to be released.  However, she did indicate that the participants were all healthy.  This may imply that their THM load was small enough that it was not causing any major health issues.  Starting with a population that has a smaller THM load means that very little should be released.  Knowing that a 1,005% increase can be seen in cadmium for someone with a smaller amount of cadmium and no health issues should prepare one to see exponential increases when working with people who have significant cadmium loads resulting in major health issues.

It is with all of this in mind that we are quite confident that if Kennedy’s study had continued for at least four months, they could have seen at least minimally significant changes in the hair’s THM concentrations.  If the study’s participants had THM loads large enough to cause symptoms, they could have seen significant changes even though the equipment they were using was not the best suited for this study.

In summary, the weaknesses of Kennedy, DA et al ([4]) study was as follows:

We chose the detox system we use because a greater amount of toxins were released with each session.  The colors and textures of what appear in the water have correlated with the physician’s diagnoses completely.  This 100% correlation should be expected since this equipment was granted European class II medical approval in 2004.  First, the manufacturer had to prove by independent research, that the system is safe and the claims were accurate.   The independent research is readily available and presented throughout this presentation.  The European class II medical approval indicates that England’s government has put the equipment in the category of powered wheelchairs, x-ray machines and infusion pumps as well as surgical and acupuncture needles.

The dark microscopy pictures of the blood make it apparent that the our preferred detox system is interacting with the body.  We hope it will become obvious that, there is the specific induction of toxic elements released through the feet.

In a separate grant proposal, we are requesting funding to formally document the color and texture concepts presented.  We are also presenting a separate grant proposal to duplicate the independent research.  At this point in time, we simply accept it as factual since over a decade with more than 7,000 uses on over 1,000 people have yielded results in harmony with the color/texture concepts and research presented for our preferred detox equipment.