Patrick After 1 Year of Autism Recovery 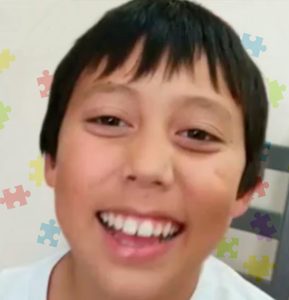 Patrick is now a teenager!

Patrick has begun to interact as a teenager should.  He holds meaningful conversations!  He went on a trip to Hawaii for two weeks with his family and most people thought he was just a normal teenager!  A few who tried to hold an in-depth conversation with him realized that something wasn’t quite right.  However, they never even considered autism!

As Patrick continues to develop into a teenager, he has begun to get sensitive about the things that teenagers get sensitive about.  He is now realizing that he is too old to play with the childish toys that used to bring him so much comfort. Instead of seeking the comfort of a parent, he is doing just as typical teenagers do.  His father asked him to come and talk with him and Patrick said, “Nope” and headed out of the room!  His father complains, “He is just such a teenager!”  This is a huge development step for Patrick!

Patrick was chosen as the only autistic child to accompany the neurotypical children on an overnight field trip to a camp site that offered skiing.  Patrick was there helping the neurotypical children put on their skis!  He played games and ate with the other children.  We were all prepared for Patrick to insist on returning home when it was time to go to bed.  He did not.  He stayed overnight without incident.  In the morning he joined everyone for breakfast, again, without incident.  Everything went extremely well and Patrick had a lot of fun.  However, Patrick says he does not want to go again any time soon!

When the coronavirus lead to his school requiring him to home-school, something wonderful happened.  His mother began to teach him and found that it only took him 10 minutes to complete the assignments that the school sent for him to do each day.  She ask for more and more work for him to do.  He was doing nearly all of his work independently.  She finally had the school send home enough work to keep him working independently for 4 hours each day.  Though he didn’t like it, he fully cooperated.  As a result, he went from third grade material to fifth grade material in just two months!

His mother gave him a fifth grade book on the solar system to read all by himself.  After he read the book, she gave him a review test to complete independently.  The 100% that he received indicated his ability to now read independently at the fifth grade level with full comprehension.  Yes, he wrote a little sloppy because the lines were missing from the page.  However, the second assignment that he didn’t get to complete shows off his handwriting a little better!

By September, Patrick had moved forward three grade levels and was able to do the same work that his class was doing.  He was able to learn right along with his classmates.  His family is now interacting with him more to help his English reach the proper level so that he will no longer need an IEP for school.

We are just so proud of Patrick! 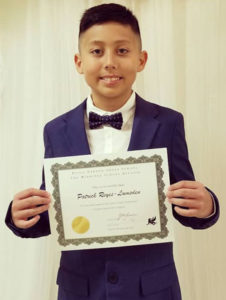 Patrick graduated in June after a year of much hard work.  Once Covid-19 shut down his schools, his mother took over as his teacher administering the work the school sent home for him to do.  She found that it only took Patrick minutes to do the whole day’s work.  We were all surprised that the school didn’t have him doing more work each day.  Patrick’s mother kept asking for more work until the school was sending home enough work to keep him busy for four hours each school day.  Patrick did the work independently zooming through grade levels in many courses. 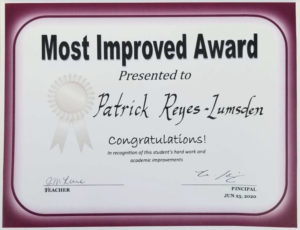 Just months later, Patrick graduated as the most improved student in his entire graduating class!  The teachers were literally tearing up as they presented him with this certificate.  They asked his father what he was doing to cause Patrick to progress so much so quickly.  For the first time, Patrick’s father made the teachers aware of their participation in Optimum Health’s Autism Recovery program.

Working Wonders with Autism: What Is Expected Next?

Regardless of their age, most of the children go through the developmental stages that they should have gone through when they were toddlers only 24 – 36 months old.  For the autistic child, these stages that they still need to go through are called developmental remnants.  As a result of progressing through these developmental remnants,  the child becomes happier, more productive and, typically, becomes proud of himself.  As each autistic child is different, there is no way to know how complete the autism recovery process will be for each individual.  Fortunately, each step forward is a blessing.  We have been awed as we watched Patrick move through those developmental remnants.  We are hopeful that it won’t be long before he no longer needs an IEP or other special assistance.  Time will tell just how complete his autism recovery process will be.

A Very Special Thank You

We would like to take this opportunity to thank Patrick and his family for allowing us to share his story.  Initially, Patrick’s father wanted to keep all of this private as he has the right to do.  However, as soon as he realized the possibilities opening up to his son, he immediately said, “Start recording all of this.  The world needs to know that this is possible.”  As a result, Patrick’s autism recovery story has inspired many to enter our autism recovery program.  To date, every parent inspired by Patrick’s progress has been very pleased with their child’s progress as well.